​NGC 7822 is an emission nebula located in Cepheus, about 3,000 lightyears away. It’s a violent, chaotic deep-sky region where young stars are being born, their powerful radiation ionising the surrounding gas and causing it to glow. These energetic stellar winds are also carving out the dusty streams and pillars seen throughout the nebula.
This image was quite a challenge to combinate the colors combination in HOS palette , I had to process it in Pixinsight and correct the three color pattern in Photoshop.
This is the first of the three palettes that I want to process. 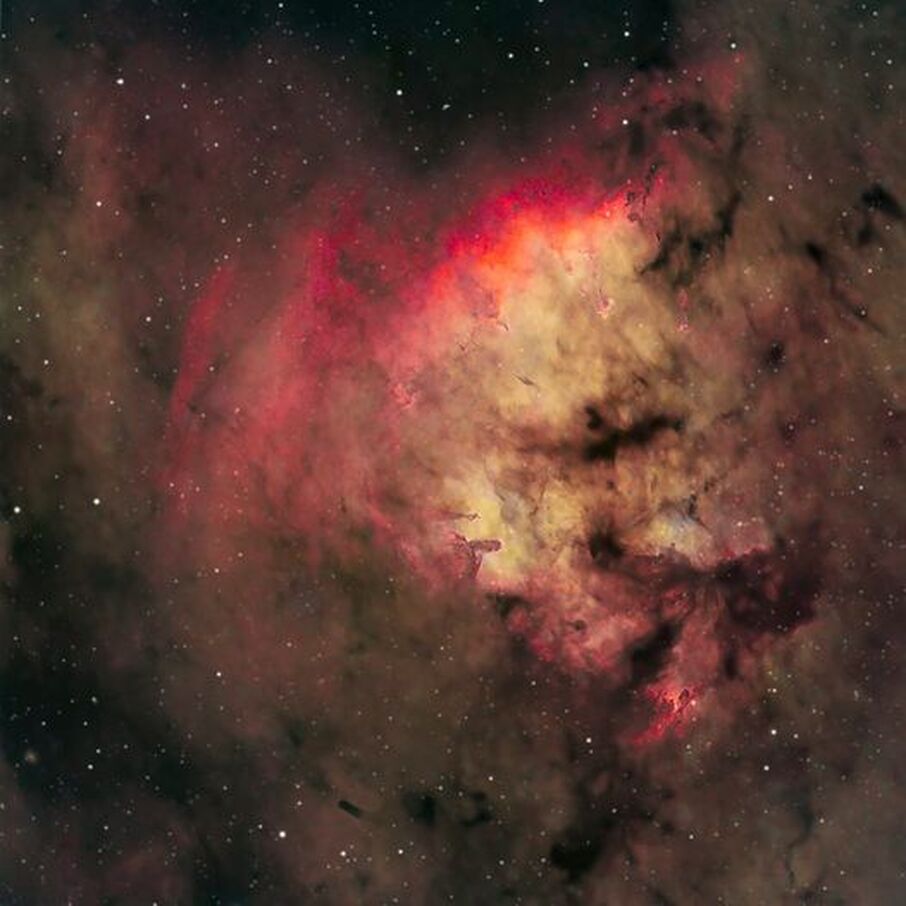 ​This image shows the Jellyfish Nebula (IC443) in the constellation Gemini, imaged in broadband using the popular HaRGB. This nebula is thought to be a supernova remnant and contains a Neutron star (not shown). It lies some 5,000 Light Years from Earth and is about 70 light years across. The main issue in the processing was the reducing of the hundreds of stars that was imaged originally. Taken from my observatory in Spain. 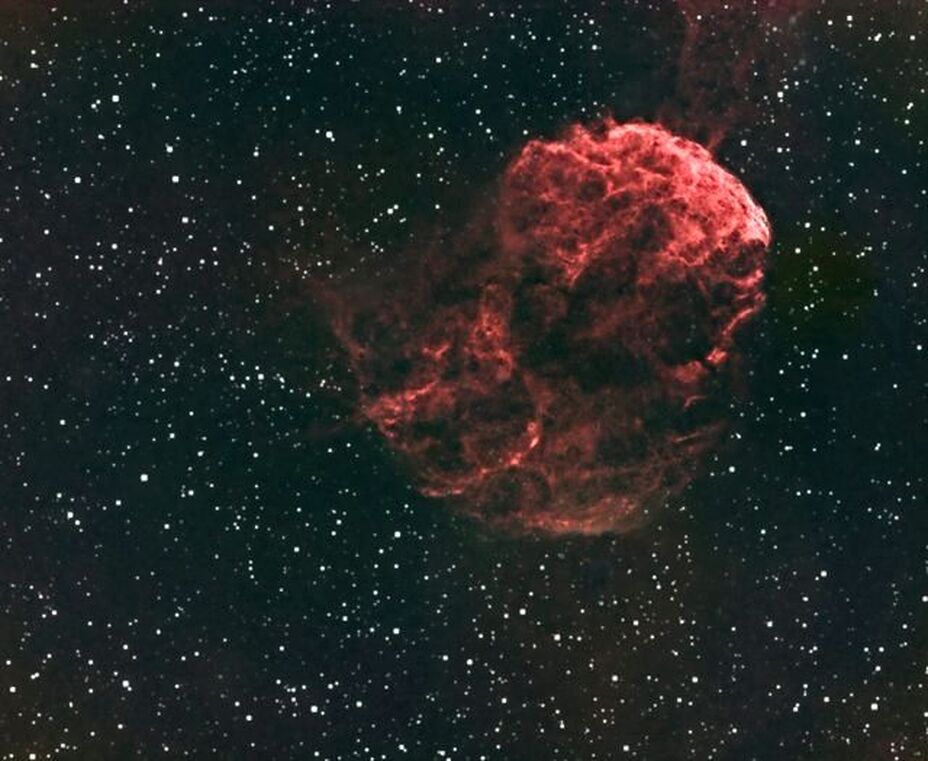 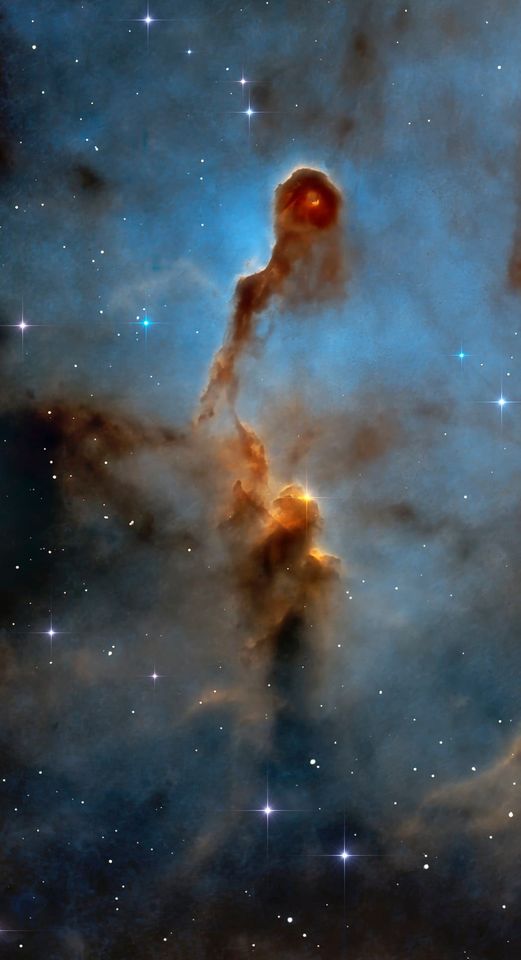 ​The Elephant's Trunk Nebula is a concentration of interstellar gas and dust within the much larger ionized gas region IC 1396 located in the constellation Cepheus about 2,400 light years away from Earth. The lower section, is commonly called the Elephant's Trunk Nebula because of its appearance at visible light wavelengths, where there is a dark patch with a bright, sinuous rim.
The Elephant's Trunk Nebula is now thought to be a site of star formation, containing several very young (less than 100,000 yr) stars that were discovered in infrared images in 2003.
Taken from my Observatory in Spain, it has a narrow band combination :
SII 34 x 900 sec bin 1x1 = 8.50
OII 60 x 750 sec bin 2x2 =12.50
Ha 40 x 900 sec bin 2x2 = 10.00
Total 31 hours
Darks 900 x 50
Flats 50 each
Bias 100 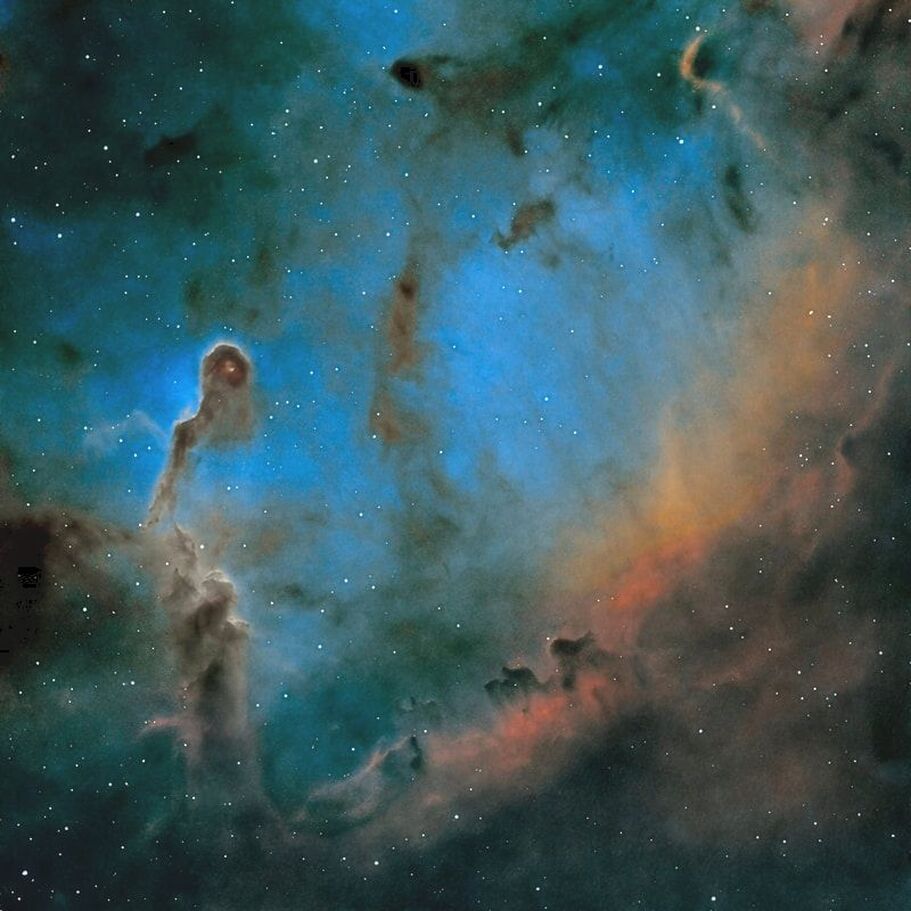 From my previous image I have further zoomed in a particular region of the nebula and to my surprise I have discovered this wonderful image of an Eagle Shaped cloud as a result of the nebula gases. The processing to this level has been carried out by using Pixinsght and this time with the help of Photoshop. Hope you like it, and Happy Holidays! 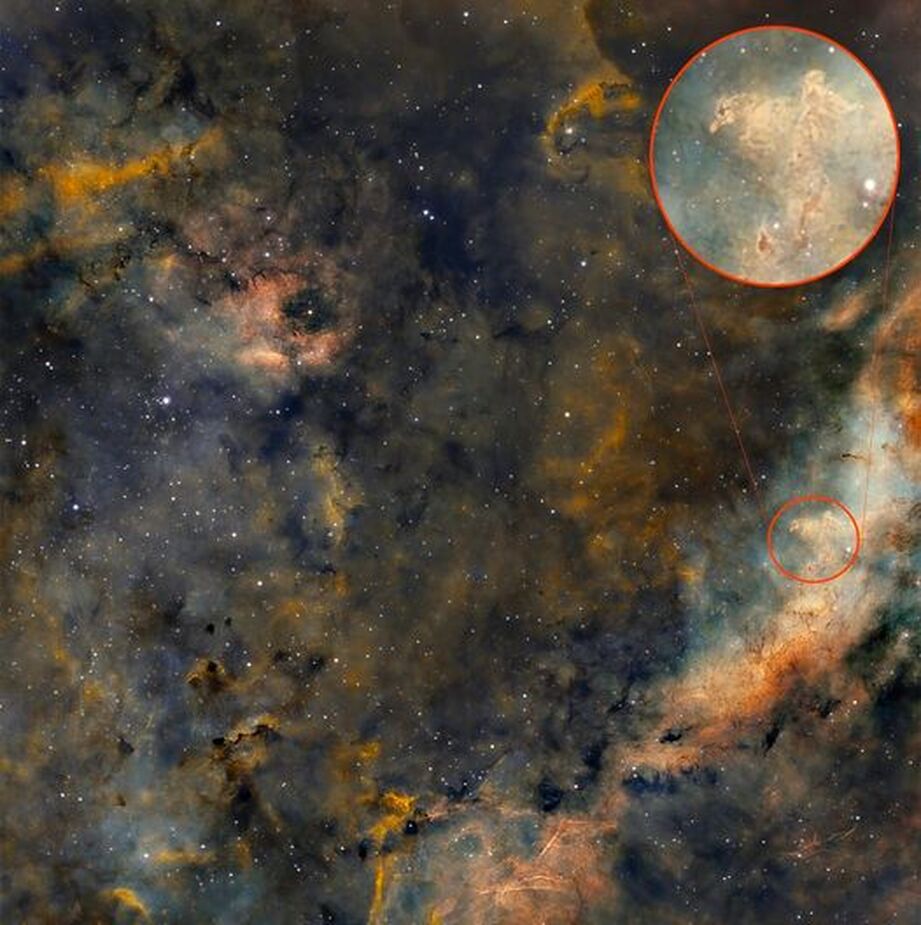 ​This images was taken 40 SII images at 1200 sec, 40 OIII images at 300 sec, 20 OIII at 1200 and 40 Ha images at 600 sec, the IC1318 is a very large cloud of dust and gas in the constellation Cygnus and Swan. A section of this giant complex is known as the Butterfly Nebula and is composed of three separate designated areas. The wings of the Butterfly are identified as IC1318 "b" and "c". The dark obscuring dust band bisecting the "wings" forms the body of the Butterfly and is designated LDN 236. The distance to the nebula is approximately 5,000 light years.
It was taken from my observatory in Southern Spain
SII 13.33 Hours
OIII 3.33 hours
OIII 6.66 Hours
Ha 6.66 Hours
Total 30 Hours 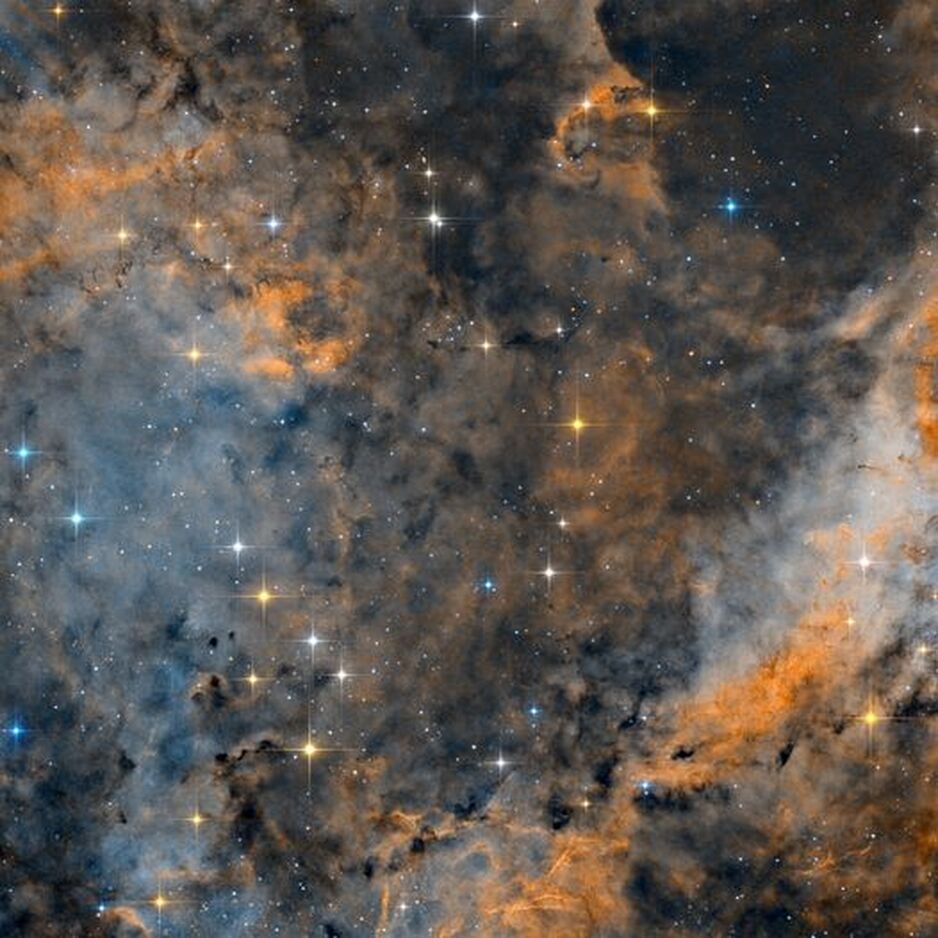 ​This photograph shows a portion of the southern Milky Way, just northwest of the Sagittarius "Teapot". The most conspicuous objects are M8, the Lagoon Nebula at the lower center and M20, the Trifid nebula to its north. M8 and M20 are both areas of active star birth. A cluster of young stars, NGC 6530, can be seen in M8 still in their "cocoon". A group of blue reflection nebulae an be seen to the east of M8. These include NGC 1274, NGC 1275, NGC 4685 and NGC 6559. Just below them the small blue planetary nebula PLN 6-2.1 can be spotted. The data is obtained from Mr Vincent J Misti, I have process this data using Pixinsight, I had to convent from a Jpg to Tiff to be able to process it in Pixinsight. I decided to reduced the stars mass and revile the massive gas region behind, with the help of starnet and starmask followed by Morphological Transformation.
The Working Process technique is similar to my previous image below. 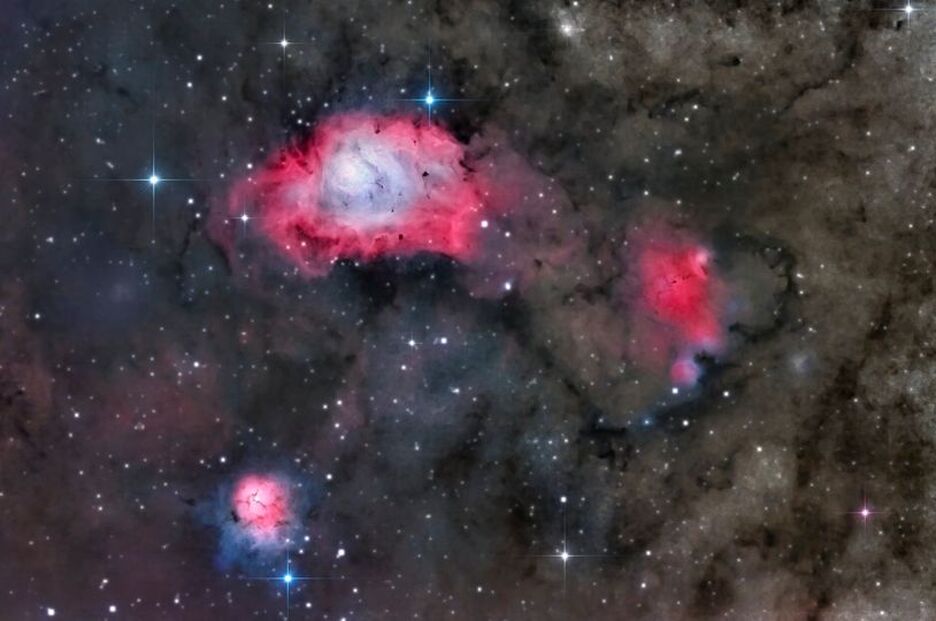 ​OCL 991 as known as NGC 6250 is a young open cluster, lying in a heavily obscured region within the boundaries of the next inner spiral feature. There are several arguments which suggest that the cluster is associated with the prominent dust cloud seen to the east of it. This star cluster made of up to a few thousand stars that were formed from the same giant molecular cloud. Given it sky position it cannot image it from Europe. I had 18hours of exposure time data images. Ha, Lum, Red, Green and Blue filters involved.
This image data is thanks to the Courtesy of Jose Joaquin Perez using a Moravian 1600 CCD camera, I decided on this project on the bases that it was difficult to process given the large volume of stars in the region.
Processed in Pixinsight, I took quite a long-time using Blink and Cosmetic Correction going back and forward checking the stars and eliminating the highest level of hot/cost pixels possible and any imperfections. Then I started with WBPP
Overall Workflow:
Processing Phase
WBPP
Nomalization Scale Gradient
Imageintergration
DBE on each Filter
Color (RGB) Combination
Colour Calibration or PCC
Denoise TGV and MLT – EZ SCRIPS
From STF to Histogram Transformation
SNCR (80%)
RGB Non-Linear Phase
Star reduction (EZ Script)
Star Reduction/Roundness Morphological Transformation (does a more reduction!)
Do a star mask
Then a MT
Star Net-Clone Stamp
Color Mask the image
Color Curves the image
Retouch Noise Reduction
Luminance Phare(if its form taken image , not extracted)
DBE – Luminance as per RGB
Deconvolution -EZ Scrip (for sharpening)
Curves Transformation to bring out overall brightness-slightly
[*]
Lum De-noise (Mask) MLT-TGV – ACDNR)
Linear Fit on RGB with Lum
[b] [/b]Ha Blending with Luminance (Super Luminance)[b] [/b]
Use HDRMT with Pixel math and Channel Combination
Do a HDRMT to both images (Ha & Lum)
Do a Pixel Math to bend each one, I prefer a higher % to the Ha rather then Lum (especially as extracted one), in the region of 80 to 20.
Do a LRGB combination
[b] [/b]LRGB Combination
LRGB combination
Ha Blinding, using Bling Script to combine it with LRGB
Image Enhancement
[*]
Use Range Mask or GAME script to localize Ha
Enhance Contract (Local Histogram Equitize)
Final Color Adjustment
[*]
Curves Transformation
Color Saturation
Foreground Brightening (Gamma Enhance – will increase brightness but not increase noise)
Background Darkling 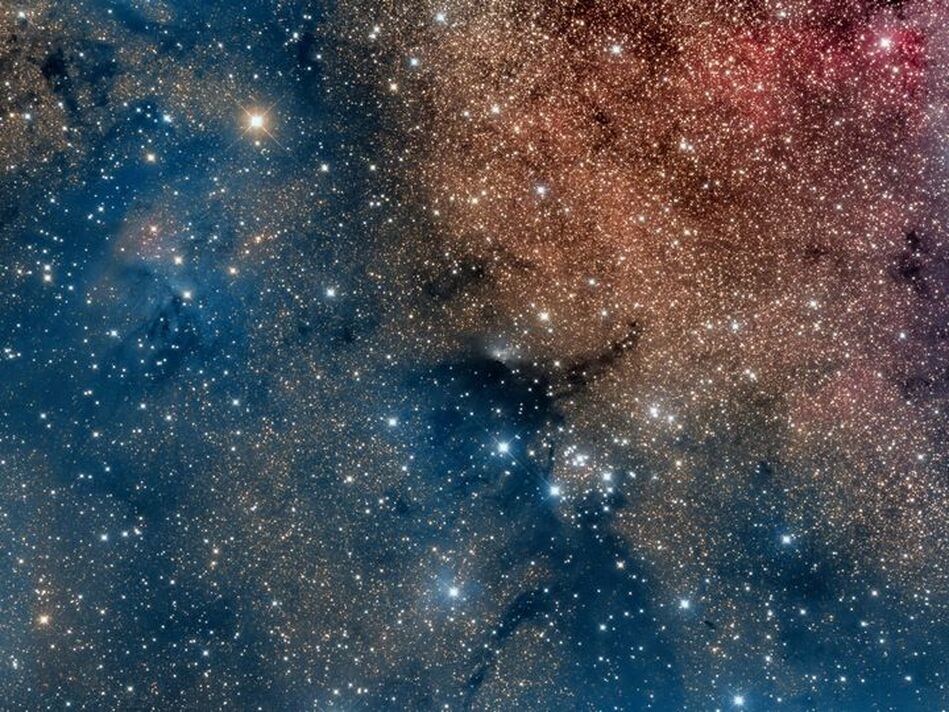 The Pelican Nebula (also known as IC 5070 & IC 5067) is an emission nebula, a star-forming region (H II region) of roughly 30 light-years across, located about 1,800 light-years from Earth, northeast of the bright star Deneb in the constellation of Cygnus (the Swan). It bears a resemblance to a pelican, hence its name.

This cosmic pelican is just off the east “coast” of its more prominent neighbor, the North America Nebula (NGC 7000), and is divided from it by a thin molecular cloud filled with dark dust, known as L935. Both, the Pelican Nebula and North American nebula are part of a massive H II emission region designated as W80
​ 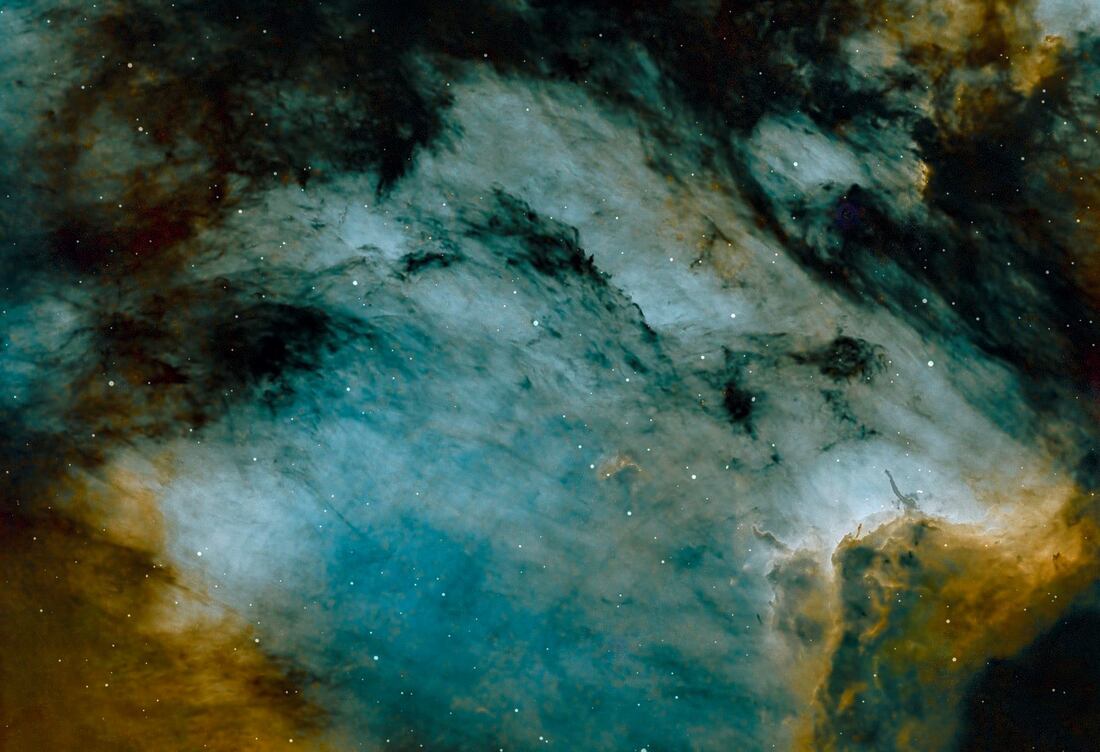 ​NGC 896
The Heart Nebula NGC 896 is an emission nebula in Cassiopeia. This is a close-up my first RGB image using QHY268C - first light on the imaging camera. I started using APP as the integration and alignment, Its a wonderful software and the final result is as good as Pixinsight. The processing was totally done in Pixinsight (LRGB)finally the star spikes using Photoshop 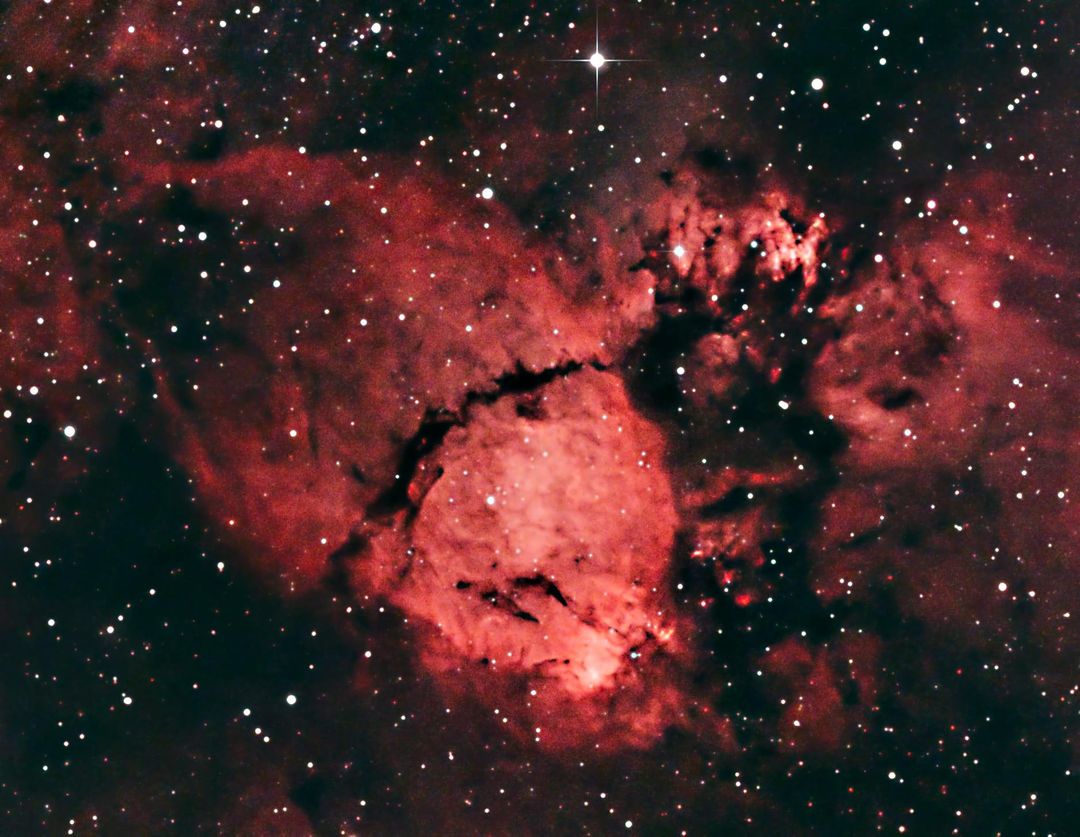 M51 Galaxy
​
This latest images to the previous one that I did back in 2016 has a major different in the Telescope and CCD camera I used.

Explaining a bit more about M51, also known as the Whirlpool Galaxy, is a grand design spiral galaxy located in the constellation of Canes Venatici. It's one of the most famous galaxies in the sky, appearing face-on when viewed from Earth. M51 has a much smaller dwarf companion, known as NGC 5195, and together they form the finest and most studied example of an interacting galaxy pair in the sky.

This image taken with my large telescope the Officina Stellar 10" , with large format FLI 16803 CCD. Over 25 hours of exposure. 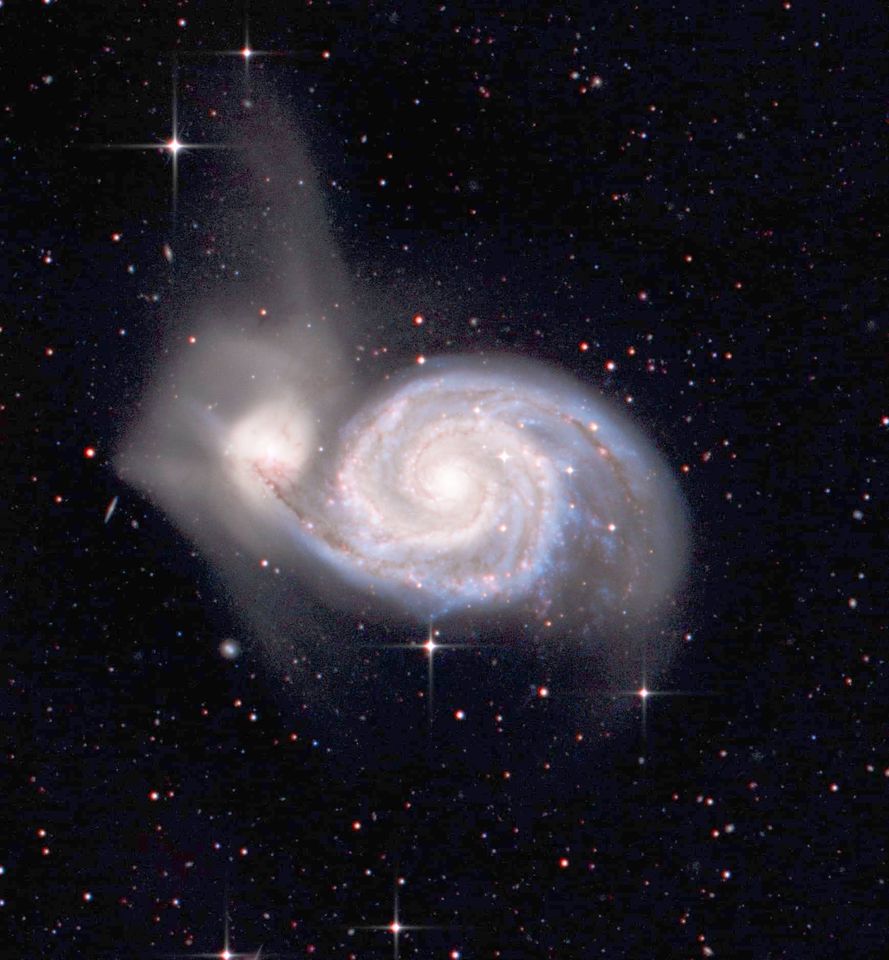 This Galaxy is one of the most spectacular example of a spiral galaxy. With two spiral arms into ne another in a billowing swirl. Its composed of hundred of billions star, this galaxy is about 30 million light years from Earth. 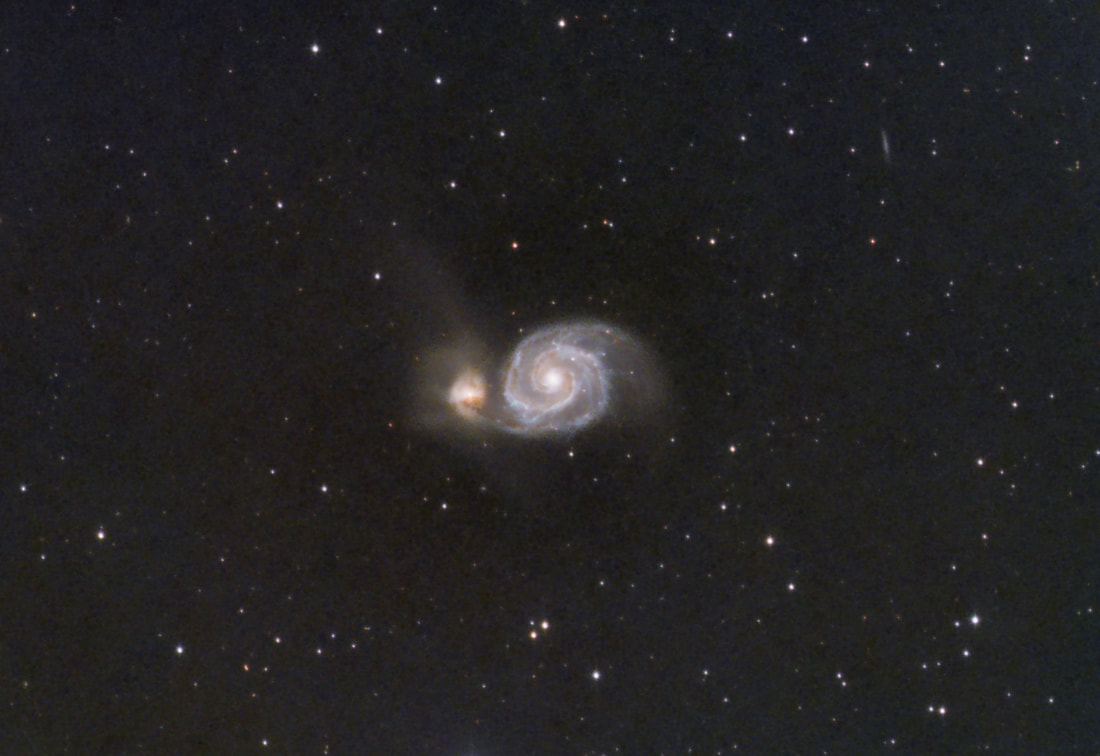 ​NGC2174 is an HII emission nebula in the constellation Orion and is associated with the open star cluster NGC2175. It is estimated to be located about 6,400 light-years away from Earth.
I took this object image way back in 2017 which I have now reprocessed in Pixinsight using SHO workflow, and retouched in Photoshop using High Dynamic Range for the color mix. 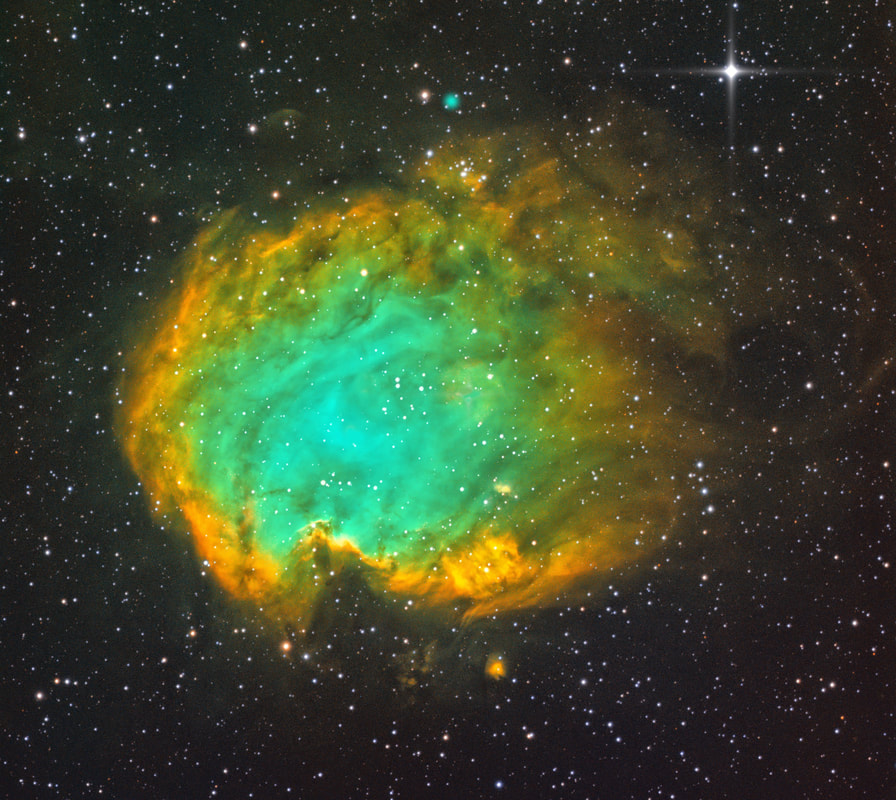 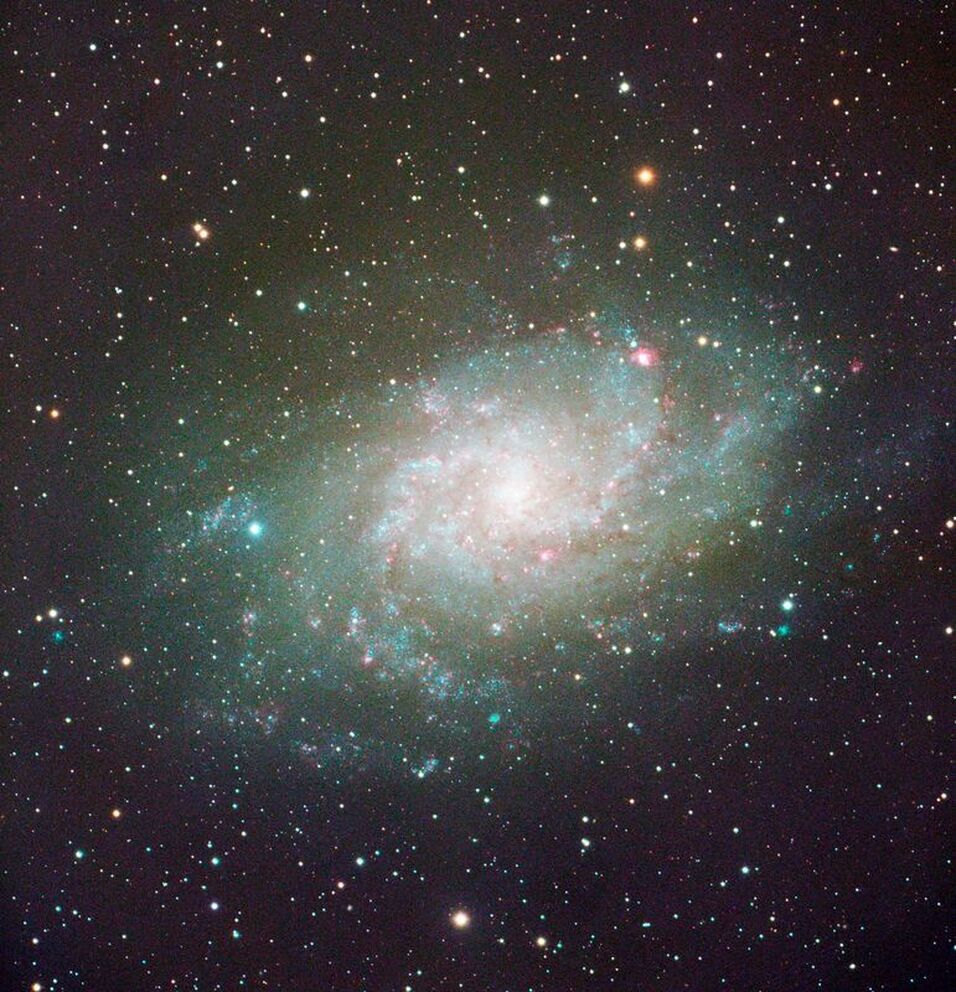 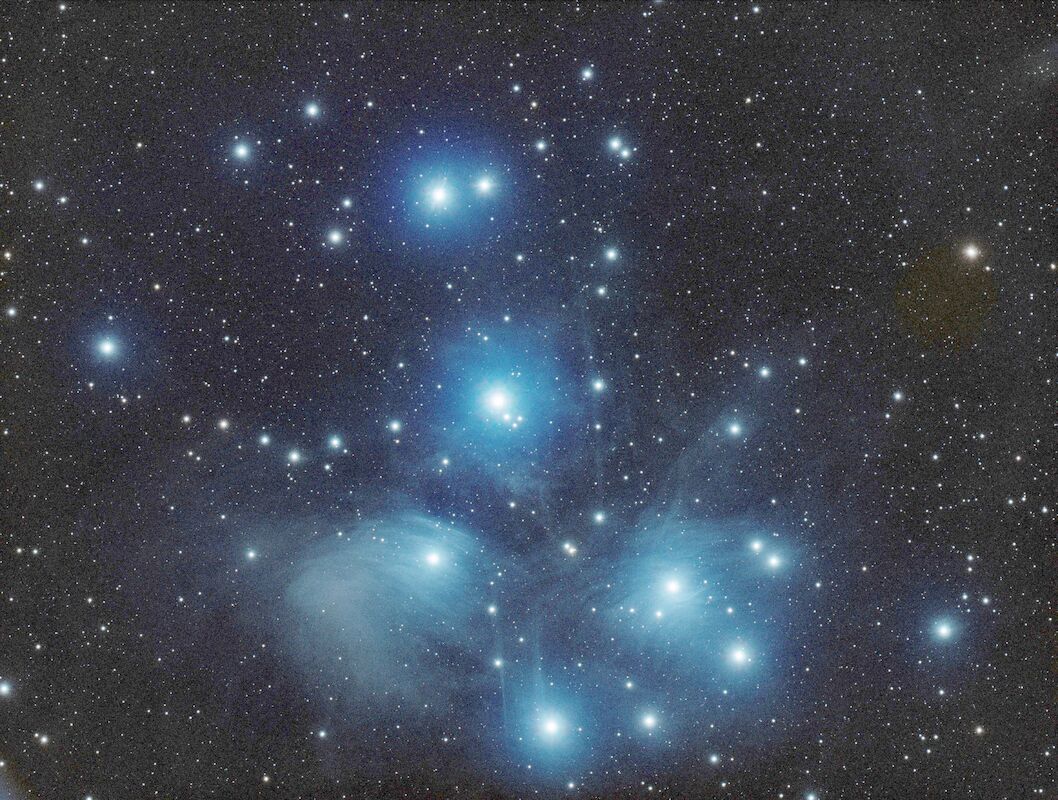 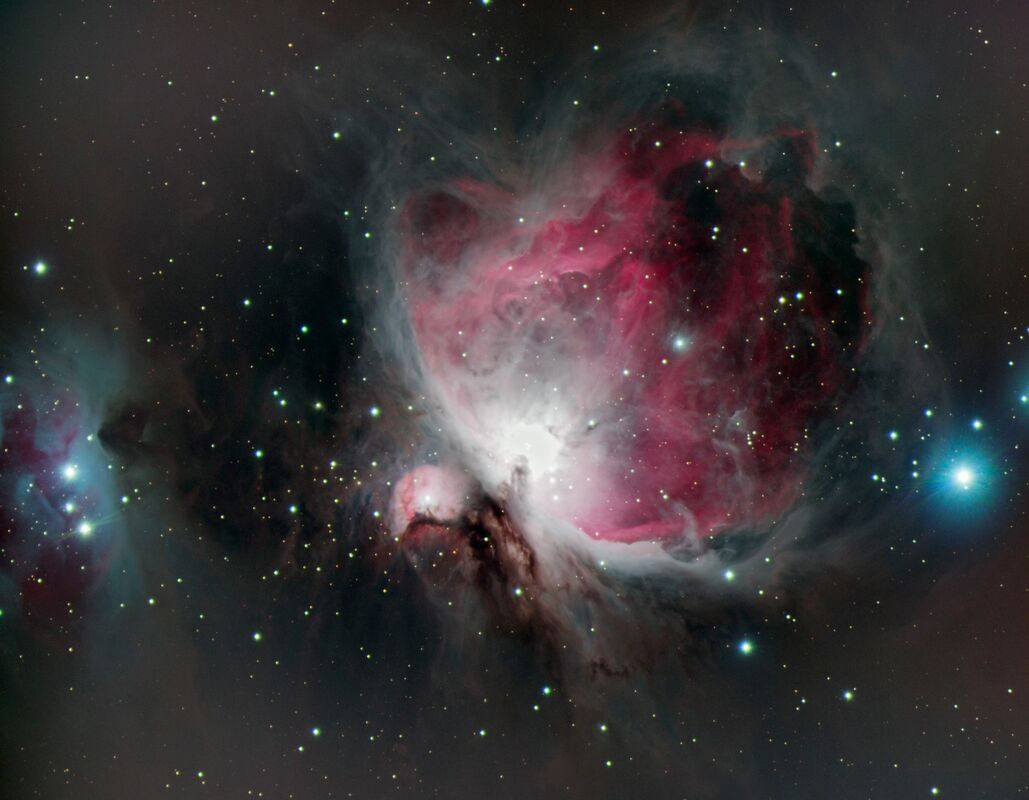 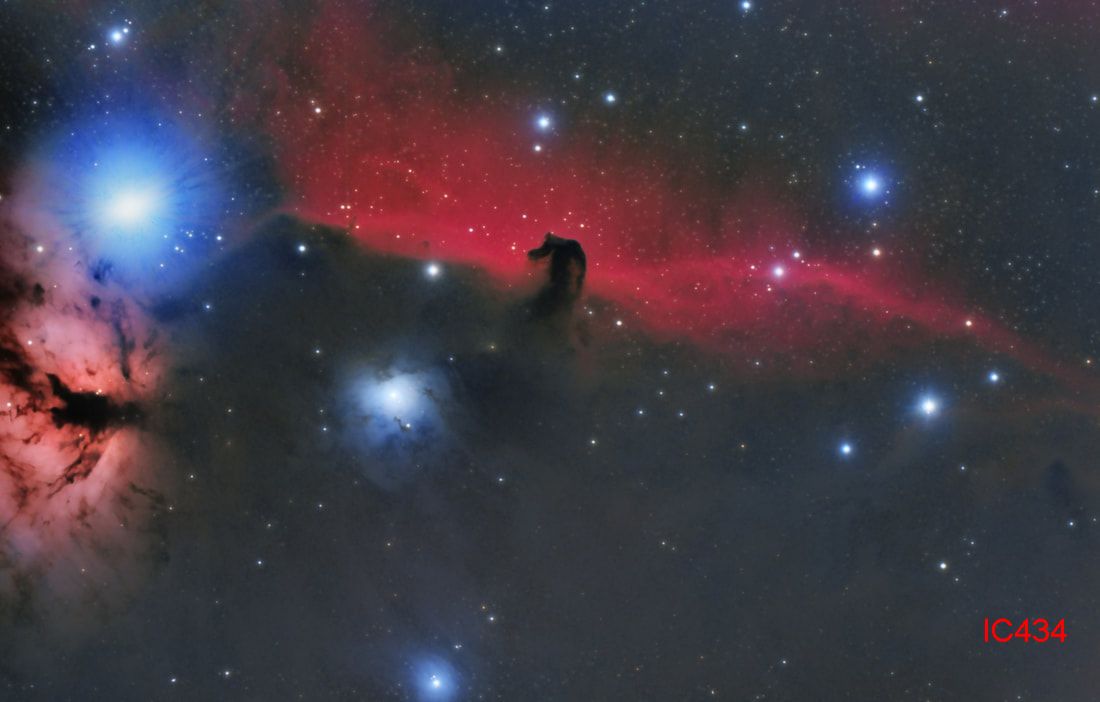 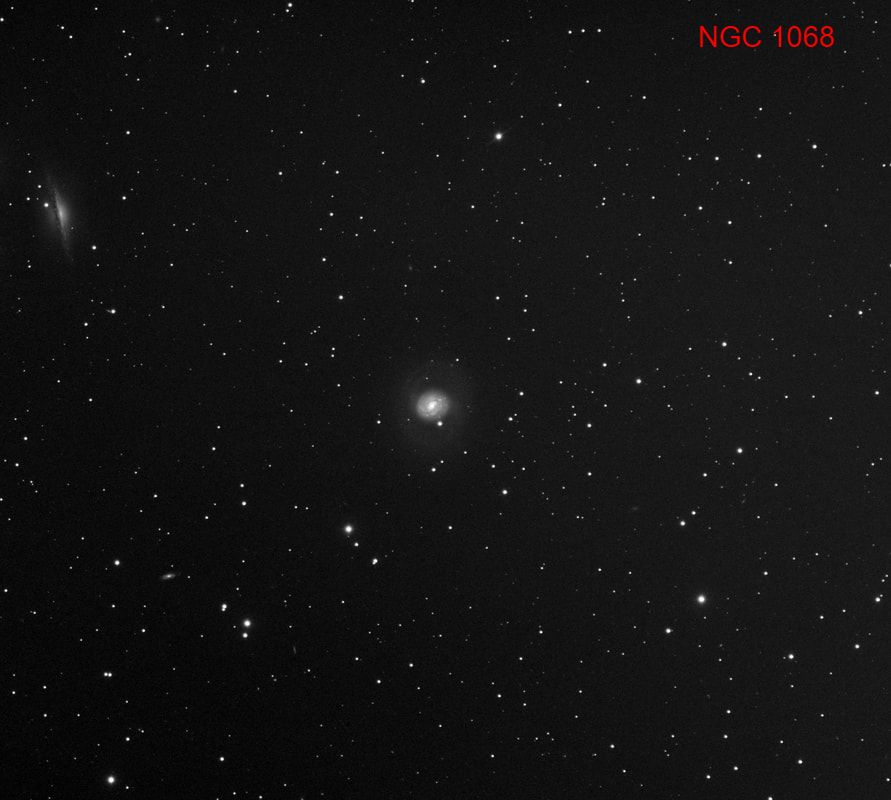 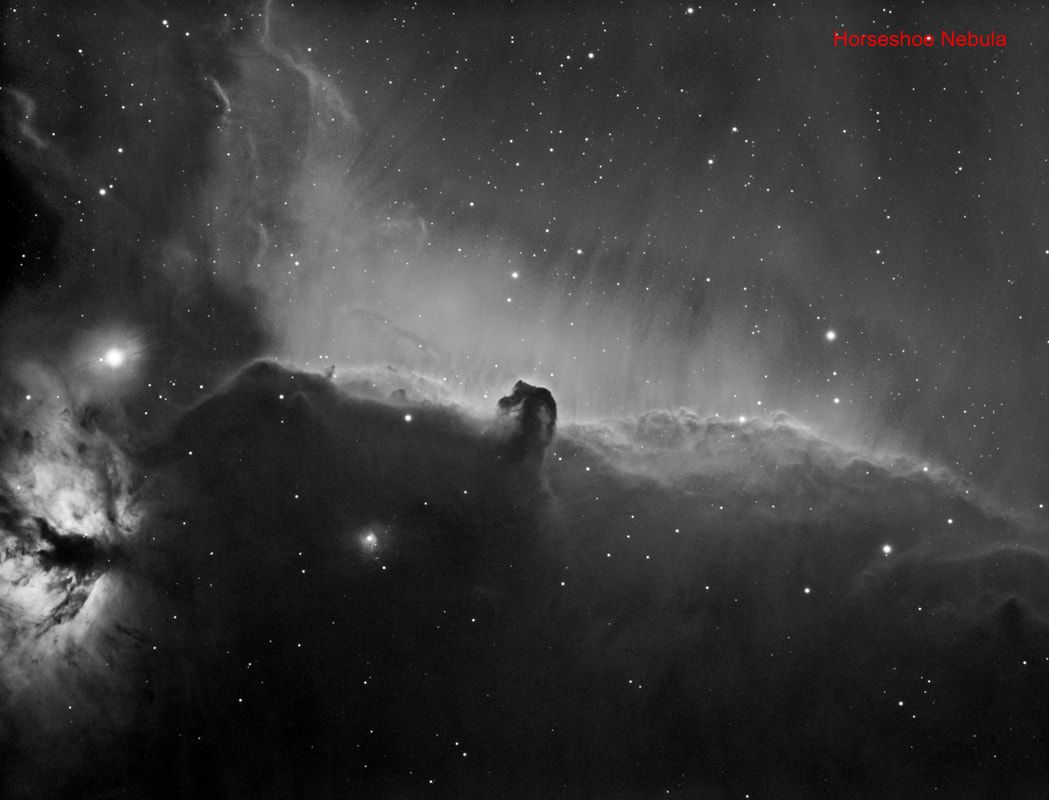 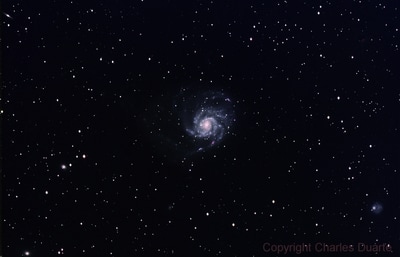 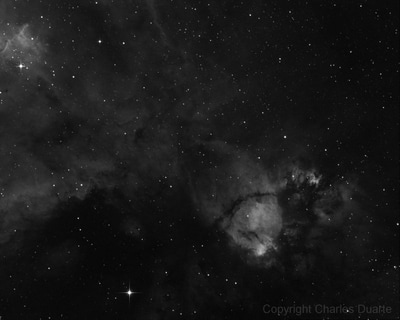 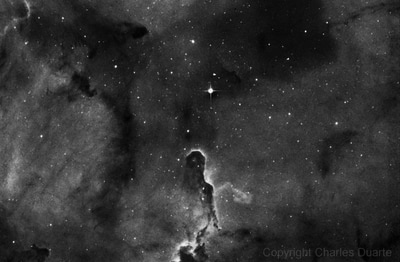 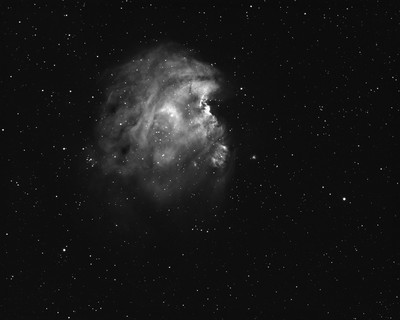 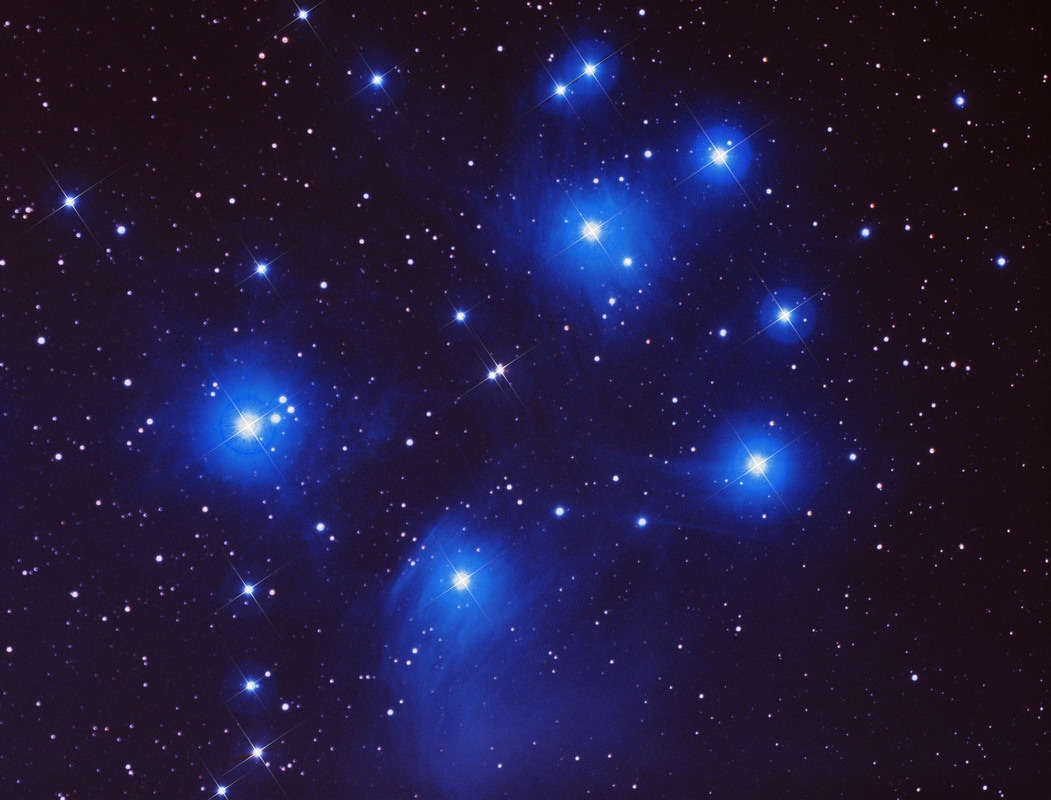 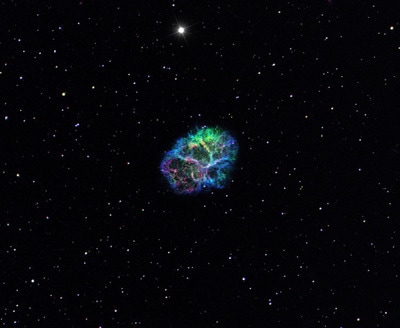 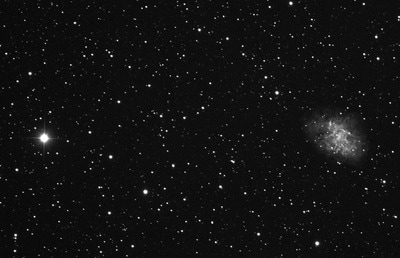 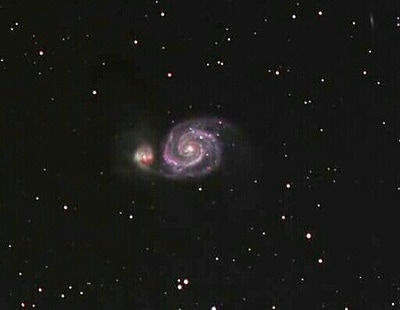 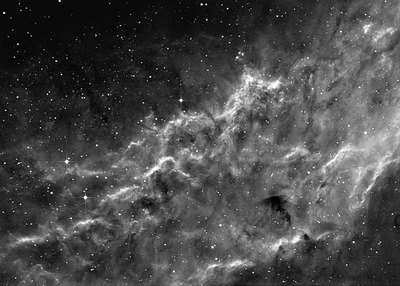 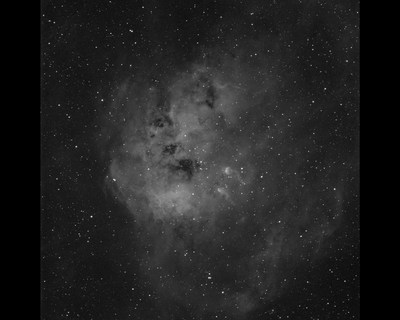